So my tour started in Edinburgh and the Hilton Grosvenor was kind enough to host me.  It was in a great old building with long narrow hallways with low ceilings — the signs were helpful but I still managed to hit my head several times.  However, once you opened your room’s door, the space opened up, the room was large and modern and the ceiling was wonderfully high.  But “Mind Your Head” became a useful motto for the entire trip — for reasons not always associated with concussions.

My first visit was to Queen Anne High School, in Fife, about 30 minutes outside of Edinburgh, on the other side of the River (pay attention, that will be important later).  They are building an absolutely beautiful bridge to aid in traffic – it should open in May. I was fortunately delivered there by Ian Stuart (@IanStuart66) who had been an educator and is now working as a consultant with notosh, helping schools think differently. He had graciously spent time arranging the visit and was kind enough to drive me around (this will also become important later). 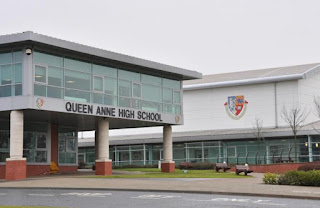 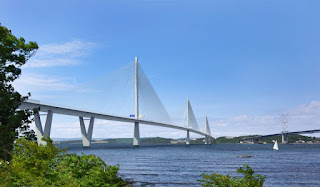 Scottish schools have access to GlowScot, a country wide system that gives them a single logon (Office365) to all the resources of both Microsoft and other programs licensed by the Ministry of Education.  I wish Ontario would have such an elegant and easy solution, given that OSAPAC licenses software for every Ontario student (*cough* except my students) there’s no reason that our Ministry couldn’t license Office365 and incorporate the same system.  Heck, just copy GlowScot wholesale.  So whether they’re in the lab, using BYOD or at home, they have complete access to both the tools and content they’ve been working on.

And not only are students aided by having this global approach to content & software; teachers who move between schools don’t have to worry about logins or files.  Everything just follows them (although there is always a momentary delay — bureaucracy exists everywhere ).

There was interesting feedback from some of the teachers I spoke to — while they liked having quick access to everything through GlowScot — and I think it’s a great system solution — apparently the first version was not particularly user-friendly and so teachers weren’t giving the new (and much improved) version a chance.
We experienced the same thing at our school with some software we tried.  If the first roll out does not go our well, teachers are less willing to give it a fair shake the second time.
There’s two things going on, both here & back home  — 1) IT should work with teacher feedback groups a little more and 2) teachers should give a little more benefit of the doubt — software evolves quickly now and they’re still a little stuck in the 1990s/2000s approach to technology.

And it was so refreshing that as Ian talked to students about Office365, some of them didn’t realize that Office365 gave them free installs of the complete Office system on their home computers and their mobile devices.  I cannot tell you how many times I’ve told my own faculty & students they have that option — and when I tell them that one-on-one, they act as if it’s entirely new news.  It’s a 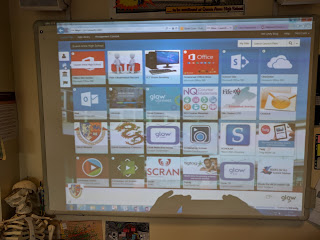 great benefit because while the web apps are pretty powerful, there’s nothing like having Excel on your desktop.

I had the opportunity to watch two teachers at work with their classes: Sarah Clark (@sfm36) and Gareth Surgey (@GarethSurgey) but more on that in the next post.  Because quite frankly I took a lot of notes and I don’t like blog posts running long.